How to support children in the associative play stage Playtime is a vital aspect of children’s lives, and besides enhancing their creative thinking, it also aids their development and growth. Depending on age, children often undergo different stages of play, and associative play is the fifth phase or stage of play among the six stages.

Through associative play, preschoolers learn and discover various skills as they play with others. It’s a form of interaction where they begin engaging in activities with other children at ages three and four.

This article will explore associative play, its benefits to children, and how to encourage and support it. But first, let’s understand associative play and its role in a child’s life.

What is associative play? 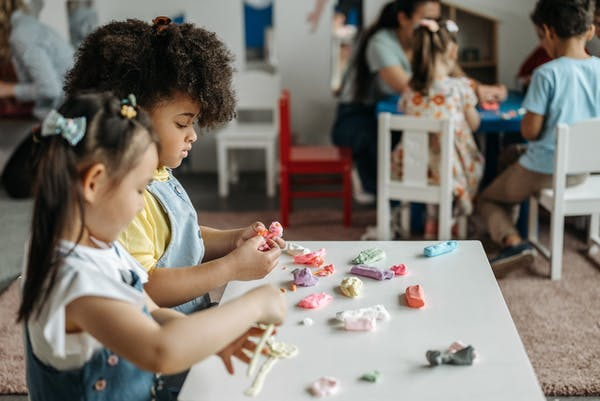 Associative play is when children begin learning how to interact with other children during playtime. In this type of play, children participate in the same activity and might exchange toys or a few words.

Associative play is the fifth out of the six stages of play, a theory developed by researcher Mildred Parten. Other stages include onlooker play, unoccupied play, cooperative play, parallel play, and solitary play. These stages enable parents and teachers to understand how children undergo different phases of play as they grow.

Associative play is the stage where children start showing interest in what other children are doing and include others in their play world. It marks the start of their social interaction, where they engage more with the children and adults around them.

Children begin to develop social skills when engaging in mutual activity, even if they don’t have a common goal. The associative play stage commonly occurs around four and four and a half years old however, it can vary for each individual child.

Understanding associative play helps you understand how to maximize children’s skills and learning potential. It’s also vital to understand all the stages of play and how they connect.

Stages of play that promote child development and growth

In addition to associative play, children undergo various other stages of play, namely:

This is a stage of play for children from birth to about three months old. In this phase, children are still orienting themselves to their environment. They are slowly learning to use their limbs and mastering motor skills. There’s neither social interaction nor concentration on a particular activity. During their play, you’ll notice that the children lack a clear focus and don’t use any language.

Solitary play typically occurs  for children between three months and two and a half years old. Children will play alone with little interest in toys far from their vicinity. However, solitary play is slightly focused compared to unoccupied play.

During this time, children don’t have a lot of interest in other children or adults. Their play has no clear goals, but they tend to have an increased focus on their toys.. In this stage, they’re exploring their environment. 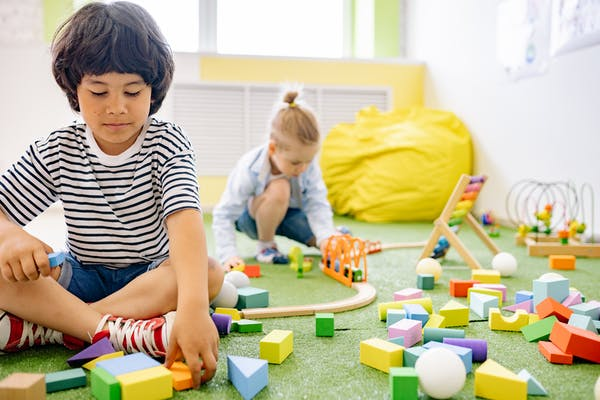 Parallel play usually occurs around three and a half to four years old. Children begin playing close to each other but individually. They share resources and watch each other from afar but don’t share similar goals or play with each other.

Their discovery and exploration are often independent, although they observe and mimic each other. An example of parallel play in action is two children sharing paint and brushes, but each using their own canvas to paint. 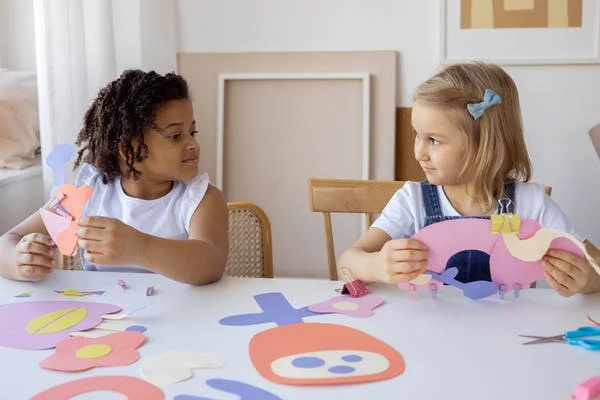 Cooperative play commonly occurs around four and a half years old. It comes after associative play and fully integrates social group play. Children share games and play together to achieve common goals. They assign roles and responsibilities to each other.

At this stage, the children achieve socialization. However, their social skills are still developing, and they’ll require your support and guidance to ensure they build positive social skills like compromising, turn-taking, and sharing.

Now that we’ve covered the other stages of play, let’s explore associative play in more detail.

What are the benefits of associative play?

Watching children begin to interact in associative play is exciting for everyone. It’s a sight to behold watching your child reaching out to other people beyond their world as they learn valuable skills.

Some of the benefits of associate play include:


Associative play is a crucial stage in children’s development, teaching them valuable skills as they learn about themselves and their place in the world.

Examples of activities for associative play

Associative play is not something that needs to be facilitated intentionally. A common setup could simply be an area with multiple options for children to play alone or engage with one another.

Here are some associative play examples:

In associative play, you’ll see a significant shift in children. Instead of simply playing alongside other children, they’ll start interacting with them. It may not be at the point of working together on a common goal, but they’ll break through their isolation.

Parallel play, on the other hand, is a stage characterized by children playing side by side but not interacting with other children. Instead, they observe others and do things on their own most of the time.

Although it’s considered the most complex stage of the six, cooperative play is a wonderful stage that teaches children new brain-boosting concepts and activities that help to further build their social skills.

Children participating in cooperative play gain many collaboration skills that help them cope well in different social settings, including school. Activities for cooperative play are well organized, with adequately distributed responsibilities and roles among the children.

How to encourage associative play in children

Children learn and develop through play. As in all their development phases, their playtime also changes. With the enormous benefits of this type of play, it’s vital to encourage and support associative play.

There are plenty of ways to encourage associative play among children. They need to explore their surroundings freely with no restrictions.

Here’s how to encourage associative play: 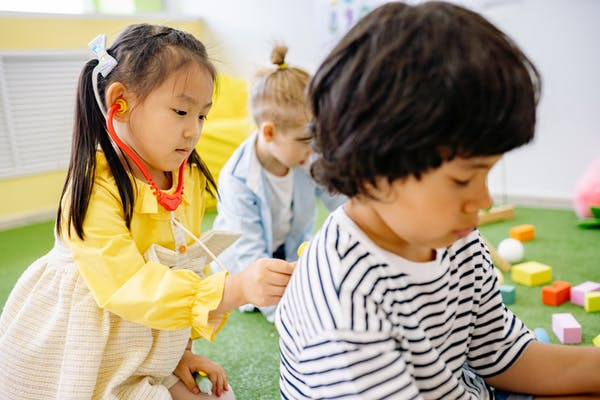 What are the characteristics of associative play?

The notable characteristics of associative play include:


At what age do children experience associative play?

Children show associative play signs when they’re about three years old. Their language skills are developed, allowing them to choose the activities they desire and who to play with. However, children are unique and reach developmental milestones at different times, so some children might be early to this stage while others may be late.

How does associative play support language development in children?

Associative play encourages language development because this is the stage where children start communicating with their peers. They’ll need to interact with others as they exchange and share their toys or express their willingness to take turns. Plus, they’ll become curious and ask others what they’re playing with.

Associative play plays a major role in developing a child’s social skills. Taking them to places that will help them interact with other children and make friends is the best way to nurture their social skills. This is a crucial stage where children learn to adjust to a new environment, and the changes happening around them will aid in their transition to the next stage of play.

Learn more about activities that promote social-emotional, cognitive, and physical development with our free list of ideas!