Onlooker Play: What It Is & Why It's Important for Your Toddler

Here is everything you need to know about onlooker play and how to support your child.

Onlooker Play: What It Is & Why It's Important for Your Toddler As children grow, they progress through six different stages of play. After their solitary play stage, they move to the onlooker play stage, where they become observers. They don’t engage with other children, but they’re aware of everything their peers are doing around them.

This blog post will explain what onlooker play is, why it's essential for children, and how you can support your child when they're in this stage.

What is onlooker play?

Onlooker play, also known as the spectator stage, is one of researcher Mildred Parten’s six stages of play. As each child grows and develops, they progress through the various stages as they learn academic (reading, language, literacy) and social (communication, problem solving, cooperation) skills. The six stages of play are unoccupied play, solitary play, onlooker play, parallel play, associative play, and cooperative play.

Prior to onlooker play, young children progress through the stages of unoccupied play and solitary play. Unoccupied play usually starts as a newborn (0-3 months) and lays the foundation for how children will explore the world. During this stage, children exhibit erratic, uncoordinated, and involuntary movement of their arms, legs, hands, and feet. Children start to discover their body parts and what they can do with them, and learn more about their surroundings.

After unoccupied play, children progress to solitary play, where they begin to entertain themselves without any other social involvement. Since they haven’t learned quite how to socialize yet, they prefer to explore alone rather than play with other adults or children. This stage gives children the opportunity to explore freely and master new motor or cognitive skills.

The stages before and after onlooker play can help you understand how your preschoolers have progressed and will continue to progress past this phase. During this stage, a child observes and watches their peers playing without participating with them.

Children in the onlooker play stage learn by observing their surroundings and taking mental notes. Not only do they learn how to play with different toys through observation, but they also learn social rules and interactions. 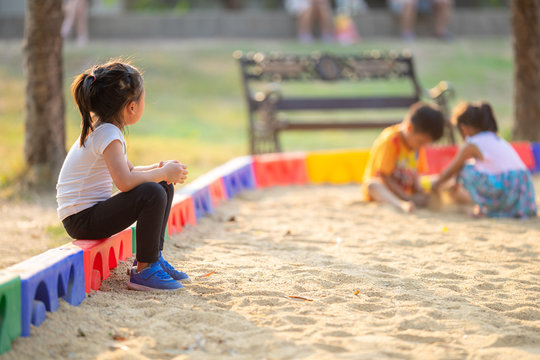 When does onlooker play start?

The onlooker play stage happens between 2 ½ to 3 ½ years of age and sometimes occurs simultaneously with solitary play. When children are in this stage, it might seem like they're missing out on physical play and interacting with other children. However, this stage is important for a child's development as it boosts their social-emotional and cognitive skills. They may not be playing, but they're busy taking mental notes through observation.

When does the onlooker play stage come to an end?

For some children, the onlooker stage ends between 3 to 3 ½ years, but others stay in this stage for longer. This is totally okay.

From the onlooker play stage, children typically progress to the parallel play stage where they begin to engage and play with other children. Some children might not be ready to play yet, but they may play alongside them. You may also notice them sharing their toys even if they continue playing independently.

What are the benefits of onlooker play?

As adults, it is easy to forget the importance of play. As the focus shifts to academics to further education and careers, play and learning almost seem mutually exclusive—however, they’re not. Play-based learning is a system of child-led and teacher-guided play used as a framework for learning. After playing, young children have shown improved language skills, math skills, and problem-solving skills. When children play, it allows them to use their creativity and imagination while strengthening their cognitive, social, and emotional development. Here are some reasons why the onlooker play stage is important for toddlers:

It boosts their social-emotional skills

Children at this stage begin learning basic social-emotional skills through observation. Some of the skills they acquire include how to listen to rules, how to cooperate with other children, and how to better control their emotions. This is also an excellent way for shy and reserved children to learn about other children and how to behave without actively engaging with them. They can learn at their own pace and gain the self-confidence to move to the next stage of play.

It improves a child’s cognitive skills

Watching other children playing can improve a child's attention, perception, and memory as they observe. They also learn complex behaviors like hand gestures and new words. With this knowledge, children are equipped with the skills they need to move to the next stage of play.

Onlooker play doesn't require any setup – it happens organically when children are around their peers or adults. They may join in if the games the other children are playing interest them. Otherwise, they'll just observe them and learn from a distance.

This stage of play includes:


How to encourage an onlooker

Here are ways you can support your child to ensure they benefit from this stage and transition effectively to the next stage:

What are some concerns about onlooker play?

If your child seems stuck in the onlooker play stage, there is no need to panic; some children stay in this stage longer than others. They might still be engrossed in independent play with no interest in observing or noticing other children around them. This is normal, especially for more reserved children who may take time to warm up to other children.

It's also worth noting that some children in the onlooker play stage occasionally slip back to independent play. This is totally normal especially for introverts when they want to step back and recharge. However, talk to your pediatrician if you're concerned about your toddler's development.

At the onlooker play stage, children start noticing their surroundings and actively observe other children play. From this stage, children usually move on to parallel play, where they start playing alongside their peers but don’t interact together.
While onlooker play might seem insignificant, children are gaining important knowledge about the world, including how to relate to others and different ways of playing and exploring.
Brightwheel is the complete solution for early education providers, enabling you to streamline your center’s operations and build a stand-out reputation. Brightwheel connects the most critical aspects of running your center—including sign in and out, parent communications, tuition billing, and licensing and compliance—in one easy-to-use tool, along with providing best-in-class customer support and coaching. Brightwheel is trusted by thousands of early education centers and millions of parents. Learn more at mybrightwheel.com.
Featured