What is Solitary Play & Why It's Important for Your Toddler

How to support your child in the solitary play stage.

What is Solitary Play & Why It's Important for Your Toddler When they’re young, children engage in play as an important part of their growth and development. As they grow, children often progress through different stages of play and gain critical skills in each phase.

In the solitary play stage, children play alone with no social interaction. This stage is characterized by a lot of exploration and children learning how to entertain themselves. In this article, we’ll explore solitary play, its benefits, and how to encourage and support your child during this phase. 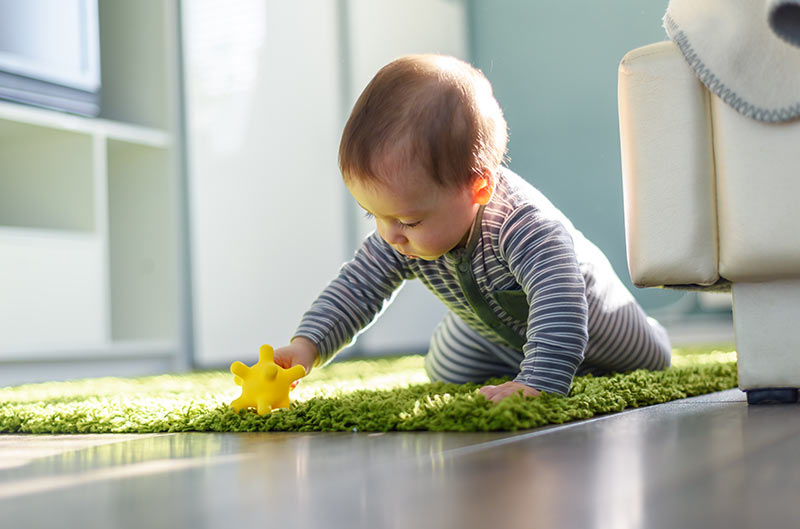 What is solitary play?

Solitary play, also known as independent play, is the stage in which a child starts to explore alone. Since they’re still young, they haven't learned quite how to socialize yet and prefer entertaining themselves over playing with other children or adults.

Solitary play is the second stage of researcher Mildred Parten’s six stages of play. Other stages include unoccupied play, onlooker play, parallel play, associative play, and cooperative play. While each child may progress through the different stages as they develop, each child is unique in their development and will have their own play preferences.

During the solitary play stage, children try to manipulate everything they encounter and enjoy discovering their toys alone. They begin to learn essential things like motor skills, cause and effect, and awareness of their environment.

When does solitary play begin?

Solitary play is common among children between the ages of three months to two years old. Children will play alone and start interacting with toys during this stage, but they typically aren’t interested in playing with other children. Since all children develop on their own timeline, some may take longer to enter the solitary play stage and others may remain in this stage a bit longer.

Why is solitary play important in a child's development?

Playing alone is vital to a child’s development as they use this time to explore their environment and their place in the world. Play-based learning has many benefits to children’s overall growth and development as it helps them learn important skills and prepares them for future learning. Below we go into more detail on some of the benefits of independent play.

When a child is in their newborn stage, their caregiver will often give them toys to play with. The solitary play stage is when a child begins interacting with toys independently and learning that they can do some things by themselves.

Solitary play also boosts a child's social independence. Although socializing with other children is great, learning how to enjoy their own company is also important.

In addition, this independence can offer a child some security when you're leaving them, regulating separation anxiety. This is because they have activities they can do and enjoy by themselves without an adult’s involvement.

When a child is playing alone, they're learning what they like and dislike. Discovering details like what toys they prefer playing with or what colors they like, all support a child as they build their sense of self. This will also guide them when they start interacting with other children. For example, they might decide to play with children who like the same toys or have the same interests.

Once you give toys to your child, it's up to them to decide how to play with them or arrange them. You'll realize that your child might even get irritated when you try to arrange their toys or join their play.

At this stage, a child is unburdened by expectations. They interpret things based on their knowledge instead of how they're expected to behave. Their play is unstructured, with no clear goals, allowing them the space to explore items with no objective.

Self-regulation is something that a child will benefit from even in their adult years. During independent play, a child has to decide what toy to use, how to move the toys, and when to stop. They have to make rules all by themselves. This gives a child the confidence to work alone and a sense of control, which can come in handy during social interactions later.

Solitary play helps a child create and solve problems. Even a simple thing such as playing with a toy requires intense brain work for children. There are so many problems children face that require logical thinking.

Solving problems during independent play makes the process fun, and the more problems they solve, the more curious they become. This is why it's important to provide fun challenges that align with your child's stage to keep their spirit of learning alive.

Since solitary play age can last from birth to two or three years, the activities can vary. However, here are some excellent examples:


As a child becomes a toddler, solitary activities can evolve to the following:


Learn more about activities that promote social-emotional, cognitive, and physical development with our free list of ideas! How to help children in the solitary play stage

Here is how you can encourage your child to engage in solitary play.

Children in the solitary play stage tend to enjoy their own company over playing with other children. This is their time to learn more about their interests and how the world works, and gain a little independence. The solitary play stage allows children to explore what they like and prepares them for the next stage of play where they begin taking an interest in how other children are playing.